THE FOREST OF SOULS

- Hey, dig something out for me to read, I just finished Shepard - said Rebeka, referring to "The Golden".

She's strolling past my bookshelf, pulling out a different book from time to time. There is no answer, so she turns her head and repeats the request with her eyes. I am still sitting quietly, comfortably sunken in my armchair.

The Nine Inch Nails concert DVD is playing on TV.

I finally move, but only to get the remote, to watch "Terrible Lie" one more time.

Rebeka turned around towards me, looking at me, in a typically girl's pose; with her palms on her waist and head slightly cocked to the side, her whole body forming the Cyrillic letter "F" ("?") .

I wake up lazily from my snooze, feeling like Tom Sawyer, caught with his hand deep inside the jar of jam.

- What exactly do you want? Everything in here is great. Otherwise it wouldn't be here, now would it? - I finally avert my eyes from the TV. I know that more than anything else in the world she hates it when I don't look her in the eyes when we talk. I don't know why, though. This isn't much of a conversation, really. At least not yet.

- I know it's all great to you. I don't doubt that at all. But I want something that'll make me feel good too!

- Hold on. I` m asking you again: what would you like?

God knows why, but I'm actually starting to enjoy this senseless game with absolutely no purpose, apart from soothing some irrational inner tension.

I leaned forward, with my elbows on my knees, and my head in some sort of a big pearl-oyster formed by my hands.

She abandoned her mask, together with the nervousness, and cheerfully chirped:

- I've developed this problem recently... nothing really fascinates me.

I snorted and muttered to myself

She took no notice.

- Everything I read is kinda O.K., but it doesn't hold my attention. I just, sorta, like, read it. I can't seem to truly get into it... like I'd really wanna - she paused.

- The dream is tormenting me again. -

- Since when? You haven't mentioned it.

She lowered her head and swallowed the answer, as if it was the aftermath of emotions which were simmering all this time, even though I haven't noticed it before.

Aware that it was expected of me, I get up and give her a hug. I run my hand through her hair, whispering words that would, hopefully, calm her down.

She slowly pulls out of my embrace, leaving me confused, but then clarifies it all by turning around, so I could hug her from behind.

It is this particular pose in which the unusual closeness and positive energy spread out, as I've experienced many times before.

I lean my head on her shoulder, she seems to have calmed down a bit.

- Well, you know that I don't like to talk about that dream. I have a feeling like I'm gonna bring it to life, revive it, if I talk about it. Like Freddy Krueger. (Robert Englund as Frederick Charles Krueger a.k.a. Freddy Krueger).

She pauses, shuddering, for a moment, then continues. It's clear to me that she wasn't thinking of the "Nightmare on Elm Street" while getting the goosebumps.

- To revive, what a paradox that is - says Rebeka - when I'm always dead in that dream. That's the only constant.

I squeezed her tighter, like a mother hugging a child terrified of monsters from the darkness.

I decide to confront her.

- In the dream, is everything the same as before?

- More or less. The scenery kinda changes occasionally, but the essence of it remains the same.

She has transformed faster than she ever before managed to do on the theater stage. I can't believe that only a moment ago we were picking books. I almost regretted those little mind-games that I put her through, although I do know that they have nothing to do with this at all .

- I'm lying in a coffin. Dead! - echoed in an almost synthetic voice of the possessed girl from the "Exorcist", or at least it appeared that way to me.

- I'm dead. I'm lying still. People I love are all standing by the coffin. You are there, and my grandpa, and... it's horrible.. Yeah, yeah... I see you, only I'm not looking out from the coffin, but sitting on a branch of some bare tree by the open grave, shooting the whole thing with my camera. -

She shook her head, sighing.

- I see my mother crying. I'm trying to reach you but, just like in every other dream, I can't. Actually, I wanna tell you that I'm fine, that I'm not in pain, although I am terrified -

She started sobbing, letting a tear roll down her cheek, causing an avalanche on the Earth's other hemisphere and then, suddenly, she quieted down.

- It's been going on for years, since I was a little girl. Only the members of procession change, adjusting to my current circle; my disposable-best-friends and serious-one-night-stand-loves. Whatever the picture is like, or it's frame, the essence - Myself - is broken.

Throughout this entire monologue she's been gazing at me, but only now she actually looked at me.

- I mean, as a screenplay, it's not really original, it's a typical scene. It's just that I've never heard of anyone dreaming of that.

Rebeka had this puzzled expression on her face:

- I don't understand, what are you trying to say?

- I'm saying that it's a well-known, common confession of people who experienced clinical death... with the addition of the light at the end of the tunnel, which they usually see.

- Ugh… well, then there's no problem, I am obviously dead. No need pondering about it any more - she tried to laugh, but immediately realized it's not gonna work. A vague expression was left to linger on her face.

Determined to put an end to these post-cathartic effects, I speak up with the sharp diction of a university professor:

- I have got something for you.

- What, a rifle and a silver bullet? - Seemed as if a mild hysteria was readable between the lines of her slightly inappropriate smile.

- A wooden stake? - She persistently kept guessing, which I interpreted as a text-book example of post-traumatic shock.

- Ah fuckit, I've got the wooden stake, but you can't have it.

We both laughed, but this time there was no hysteria.

- A book you were looking for. 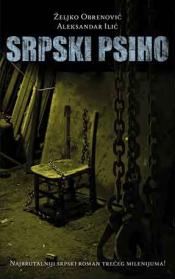